A 35- year-old male and a 38-year-old female this morning appeared in Magistrates’ Court charged with Breach of COVID regulations. The couple from Maryland in the United States arrived at L.F. Wade International Airport On Sunday 1st November and indicated they were here to attend a wedding. A Port Health nurse outlined the COVD-19 restrictions to them, informed them that they were required to take another COVID-19 test prior to leaving the airport and that they were to remain in quarantine at their hotel

The Bermuda Police Service is appealing for the public’s assistance with the ongoing investigation into an armed robbery, which took place at the Somer’s Supermart in St. Georges earlier this week. Shortly before 6:00 a.m. on Monday, 2nd November, police received a report of a robbery at the Somer’s Supermart in St. Georges. It is alleged that a male brandished a firearm, forced the manager into the store and demanded cash. The suspect is described as 5’ 9” tall, medium built, dressed in blue jeans, a black

At around 9:12 p.m. on Thursday 29th October, police received reports of a disturbance involving several persons in the parking lot of Southampton Rangers Club. Initial indications were that a male was injured and had left the location in an unknown motorcar. However, upon arrival at the scene, officers located the injured party with what appeared to be stab wounds, along Horseshoe Road in the vicinity of the club. EMTs attended the scene and the injured person was transported by ambulance to King Edward VII

The Bermuda Police Service (BPS), confirmed the death of 27-year-old Daunte Woods,who succumbed to injuries sustained in a stabbing incident which occurred shortly before2:00 a.m. on Sunday 25 th October. Mr. Woods was reportedly injured following a fracas which started during an event at theSomerset Cricket Club. As many as five males were reportedly injured during the initial incident, withone of the men being treated at the hospital for a stab wound to his abdomen. One of the injured males has been arrested in connection with

Shortly before 2:00 a.m. today, Sunday 25th October, police received a report of a stabbing incidentnear the junction of Hook and Ladder Lane and Somerset Road, Sandys. Officers responding to the call found a 28-year-old male had been stabbed in the chest and was inand out of consciousness. The officers administered first aid until the arrival of Emergency Services. The injured man wastransported to King Edward VII Memorial Hospital for treatment to his injuries. He howeversuccumbed to those injuries and was pronounced dead by an on

Firearms Incident Pembroke Park Lane area of Pembroke Parish at around 9:15 p.m. on Friday 23rd October. Police received reports of several gunshots at a nearby residence and upon arrival, officers found the two victims, one of whom was transported to King Edward VII Memorial Hospital in a police vehicle, the other, via ambulance. Detective Inspector Kenten Trott of the Serious Crime Unit appealed for calm as he urged anyone with information on this latest shooting to contact police. Investigators are particularly interested in speaking with anyone

At around 7:00 a.m. on Sunday 20th September, police responded to a report of a sexual assault in the area of Fairylands Road Junction, Pitts Bay Road, Pembroke. The female victim told police she was sexually assaulted at knife point by a male who attacked her as she made her way to work. The assault was thwarted by a passerby who contacted police. The suspect fled the scene, riding north along Pitts Bay Road on a red motorcycle, with the license plate covered. Anyone who may have

Witness Appeal in the case of Jahkobi Smith

The Police need your help to solve this case. What they know At around 7:15 pm on Saturday 29th July 2017, Jahkobi Smith was fatally stabbed after he was involved in an altercation that took place at the West End Sailboat Club, Sandy’s. At that time, there was a wake being held for the late Jahcari Francis.Police and EMT’s rendered assistance to Mr. Smith at the scene; however, he was pronounced dead shortly after his arrival at King Edward Memorial Hospital. The Bermuda Police Service is

At about 10:00 a.m today, Sunday, 9 th August, passersby observed a male, with what appeared to bestab wounds on Union Street in Pembroke. The 60-year-old male was transported to King Edward VII Memorial Hospital, via private car and wasadmitted for treatment to multiple stab wounds. However, his injuries were deemed to be non-life threatening. Based on information received in relation to this incident, police attended a Pembroke property toconduct enquiries and subsequently arrested a 69-year-old male who is now assisting with theinvestigation into this matter. Any member 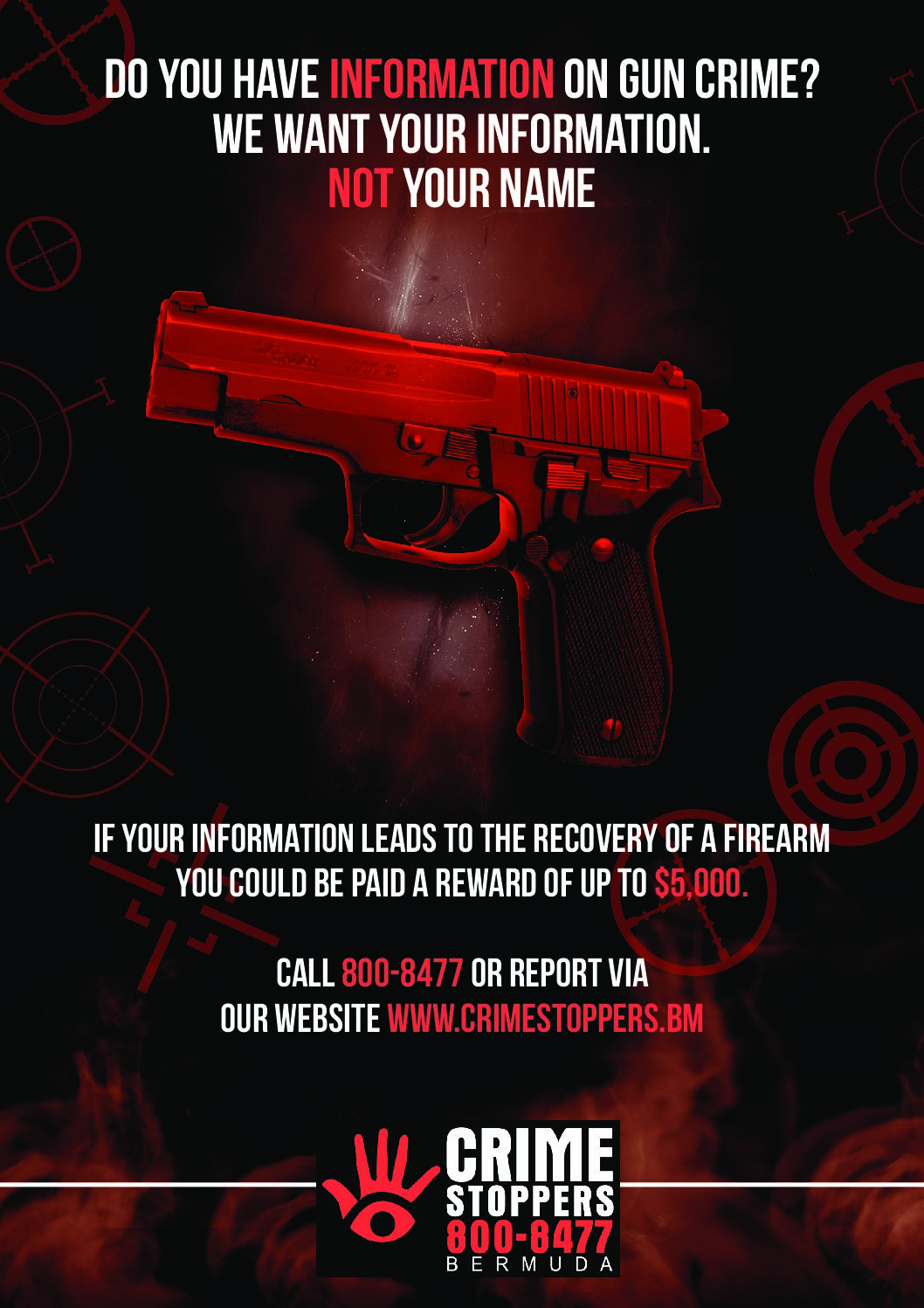 Gun Crime is too serious to ignore

We are a registered Bermuda charity (No. 410) helping law enforcement to locate criminals and help solve crimes. We have an anonymous 24-hour Hotline phone number, 800-8477 (TIPS), that people can call to pass on information about crime; alternatively people can send us information anonymously via our Anonymous Online Form. You don’t have to give your name or any of your personal details. We do not trace calls or track IP addresses.

Chip in now, every dollar helps our fight against crime.